HTTPS: Security is Now a Factor in Google’s Algorithm

Security is one of the biggest concerns that consumers face when doing business, making purchases, and sharing information online. In recent months, security breaches at Target and the hacking of millions of people’s personal data thanks to illegal groups in Russia and other countries have blanketed the headlines. Google has taken note of the 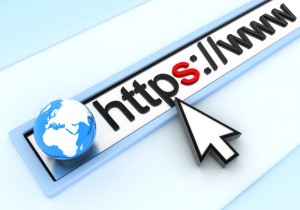 increasing focus on security, and has introduced a new factor to its algorithm to reward sites that are taking security seriously. Here’s a closer look at what you need to know about secure protocols and your website rankings.

The Difference Between HTTP and HTTPS

If you’ve paid attention, you’ve likely noted a difference between individual websites and how their URLs are presented. Many sites that handle sensitive information – like banks, online shops, and health portals – begin with HTTPS rather than the more traditional HTTP. HTTP stands for Hypertext Transfer Protocol, and refers to how information is moved between your browser and the end server. The S in HTTPS simply means secure. While the protocols used are far from perfect, it ensures that some level of encryption is in place and that the company is taking what steps it can to protect your information. Up to now, employing secure transmissions has been in a company’s interest from the perspective of smart business practices and customer security. But Google just announced that it will also have an impact on search rankings.

The Role of Security in Ranking Well on Google

In an August 6th blog post, Google announced its perspective on security via its Webmaster Central Blog. They used their own approach as the model: “Security is a top priority for Google. We invest a lot in making sure that our services use industry-leading security, like strong HTTPS encryption by default. That means that people using Search, Gmail and Google Drive, for example, automatically have a secure connection to Google.”

The post then goes on to highlight the announcement of HTTPS Everywhere, an idea introduced at this year’s Google I/O developer conference. Google goes on to explain that “over the past few months we’ve been running tests taking into account whether sites use secure, encrypted connections as a signal in our search ranking algorithms. We've seen positive results, so we're starting to use HTTPS as a ranking signal.”

What This Means For Your Site


Right now, Google is calling HTTPS a “very lightweight signal.” A number of other factors, such as well-structured SEO foundation, high-quality content, and regular updates are playing a more important role in ranking. Currently, the update is said to affect only 1% of global queries. While not expressly stated, it would be unsurprising to find that the queries initially impacted are probably in sensitive areas such as financial services and commerce.

But it’s fair that say that this focus on security represents a first step. Google has explicitly stated that it’s likely they will increase the roll-out so that it plays a bigger role and affects a higher percentage of queries. It is, in SEO terms, a warning shot over the bow. Now is the time to pay attention to your security configurations so you’re not penalized for it later.

If you’re already using an HTTPS protocol, it’s important to make sure that your configuration is truly secure. One of the easiest ways to do this is to test your site using the Qualys SSL Labs SSL Test tool. For businesses that have not yet taken this step, it’s time to consider your security set up and develop a plan for migrating to secure transfer protocols. Google has provided a full tutorial to help you navigate this highly technical process.

Do you need assistance assessing and implementing this for your business? Contact us at Be Locally SEO today to arrange for a website audit and personalized consultation.